Yes, we received the SC10 Best Paper Award for our paper “Characterizing the Influence of System Noise on Large-Scale Applications by Simulation”. Congratulations also to Timo and Andrew! SC10 is the premier international venue for HPC research and development. Only 50 of the 253 submitted papers have been accepted at SC10 and it was very nice to hear that our paper was one of the best paper nominees (each track nominated a best paper), but I didn’t expect that we would be best of all the nominees! The final decision was made after the presentations. My talk was in a way too small room which was completely packed (people were standing at the wall and sitting on the floor in the aisle). The room was “allowed to” host 150 people (sign at the wall) but there were at least 250 in there :-). Glad that there was no firefighter around. Well, the air got rather bad after ten minutes ;-). The talk itself went extremely well, I was right in time and the audience had a lively discussion that I merely moderated (many questions trying to pinpoint flaws were actually answered by the audience :-)). That was really enjoyable. 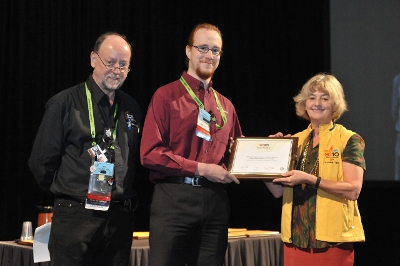 Generally, I really enjoyed SC this year, I have had so many meetings that I was barely able to check the show-floor for goodies. New Orleans was also great (well, my hotel was, let’s say “suboptimal”, but it was very cheap). I’m looking forward to next year!