Right after the conference in Tucson, I had to go the the SC11/SC12 committee meeting in Seattle. It didn’t seem useful to fly back to Champaign over the weekend (I could have spent 20 hours in planes and 6 hours at home, probably sleeping anyway. So I just stayed in Seattle over the weekend. I received very bad news during that trip but fortunately, I was around a friend and we went hiking in Seattle (thanks Frank!).

We did two day-hikes that were not trivial. Unfortunately, I had my knee injured before but it was ok. On the first day, we climbed mount SI, acutally, we climbed from the bottom to the *very* top (the rock thing on the top!!). This was quite a hike. Approximately 4000 feet height difference and three hours walking (one way). The last climb was up a massive rock wall, it was very dangerous (adrenaline!) but also very impressive and nice. We beat the mountain!

The second day hike was to a large waterfall and a lake at the top of a mountain at Lake Serene. It was just stunningly beautiful even though I got a bit wet in the waterfall, and slipping was somewhat dangerous too :-).

Here is the GPS tracking of our Lake Serene hike (my new phone rocks!): 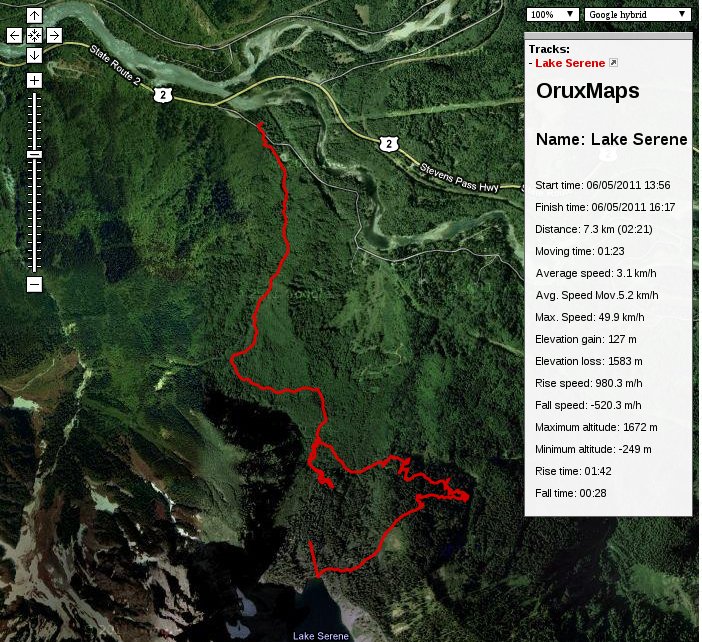 Here are some pictures:

The majestic mountain! Yes, we hiked from the very bottom to the very top (the massive rocks at the top).

Very nice views on the way up!

The first “station” where most people stopped :-). Frank and me made it too!

Me and Rainier again

Enough posing, this is the last wall to climb!! Kinda straight up a rock wall 🙂

Yes, falling was a big danger but it only happened nearly 🙂

No stairs but nice rocks

The very bottom, people thought we were crazy that we tried to jump even higher than that 🙂

The proof that Frank and me made it!

We took another route down (without knowing).

The bottom of the mountain had a very nice valley with a river.

But the water was *freezing* cold!

Yes, falling can be deadly!

And the water was really rough!

That’s why I had to walk into the fall!!! Man, the drift and pressure was really high, I was nearly swept away. At least I was very wet afterwards but it was worth this picture :-).

The waterfall from the bottom

Ah, that’s where I would have fallen :-). I still prefer standing there.

Somebody had to keep this thing in place :-).

The lake at the very top. The hike was dangerous and long and the lake somewhat disappointing. And it was *really* cold too!

Yes, it was still full of ice (June).

But Frank and I made it!

And some nice things on the way down :-).