Well, I had another crazy trip last week. I attended two meetings, one in Washington and another one in Poughkeepsie (yeah, I bet you don’t know where that is, it’s an IBM research lab close to Fishkill and about 1:30hrs north of New York City). So I flew to Washington and attended the first meeting (I learned that some subway stations close at 9pm without announcement). Then I flew back to IND because I already had this flight booked and it was cheaper to fly from IND to LGA (through DCA) than from DCA to LGA directly. Doesn’t make any sense but I could sit three hours in lovely airplanes before I arrived back at exactly the same terminal where I left in Washington. Anyway, I made it to LGA, La Guardia New York at 11pm in horrible rain. I got my car, got lost in the Bronx for 30 minutes and then made my way towards Poughkeepsie. The drive was horrible, I saw 30 cm of snow falling in just one hour (amazing) and I barely made it to the hotel before getting stuck.

Well, the meeting was great but I’m not supposed to report on this one (publicly).

Then, on Friday, I had another appointment at IBM TJ Watson, about 45 minutes away. But it kept snowing and Poughkeepsie lost power (they had candles in the hotel :-)). I left two hours early for IBM and barely made it on time, just to learn that TJ Watson was closed and our meeting was one hour late.

The blizzard was strong, all public transit stopped working, all schools and public institutions were closed and most companies too. The roads were barely passable, many freeways were closed — and I didn’t know where to go (I only had the rental car map which was kind of useless, however, my N810 really rescued me there!). Here are some impressions from the drive: 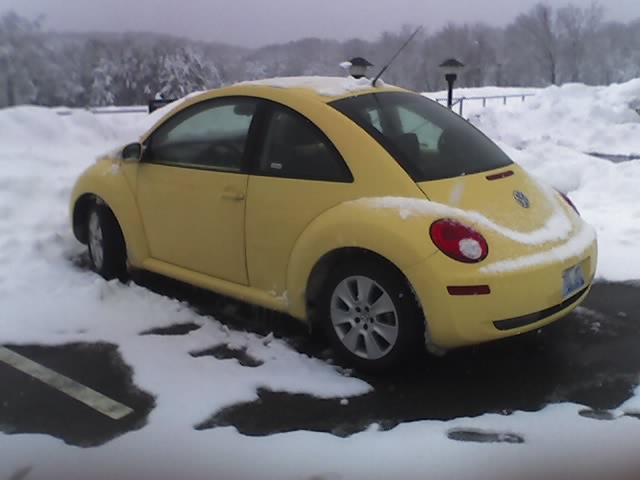 My rental car – I got a nice VW Beetle. Very powerful and the traction control was really worth it (I was the fastest on snowy streets). 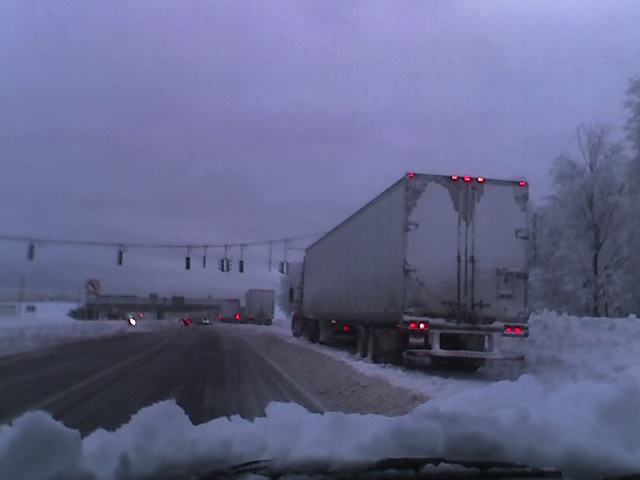 The main streets (Highway 9) in the morning. All trucks were stranded. 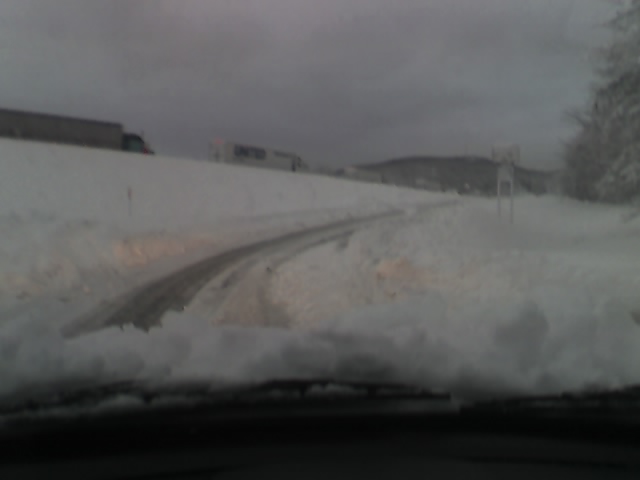 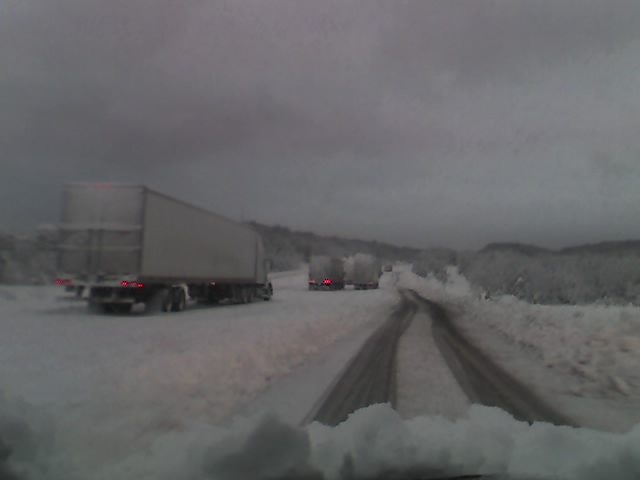 I-84 so far. Looks kind of free, isn’t it? Well, besides all those stranded trucks. 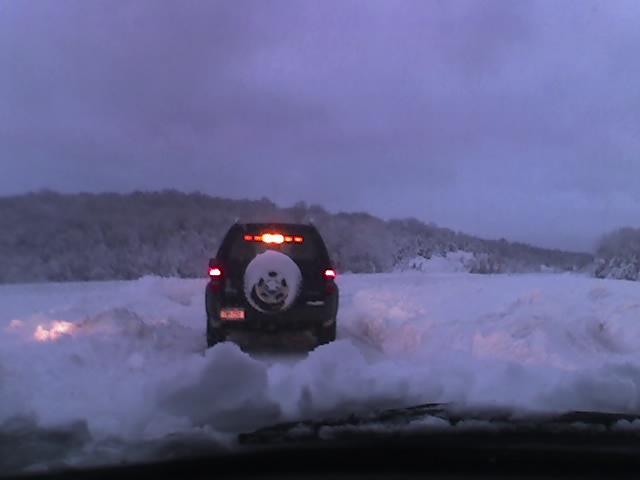 Well, that’s the end ot I-84: a cop who told me that the freeway was closed :-(. Going back one mile in reverse is no fun (especially when you got cars coming from behind and the danger of getting stuck). 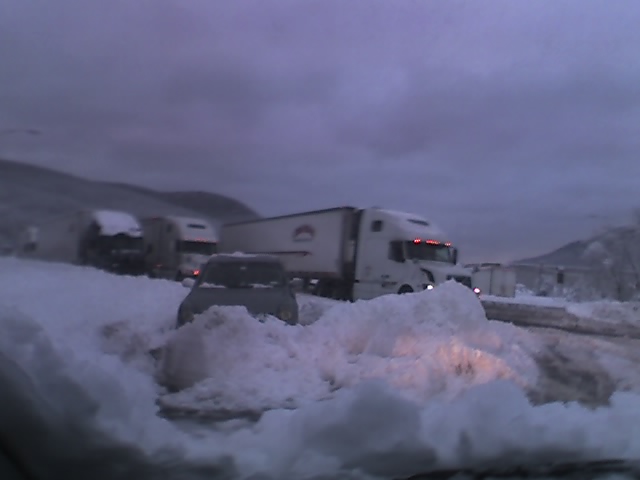 Here is a stuck and abandoned (and snowed in) car 🙂 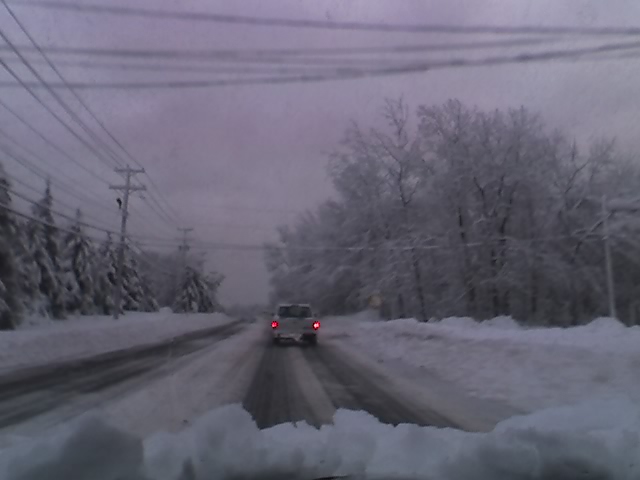 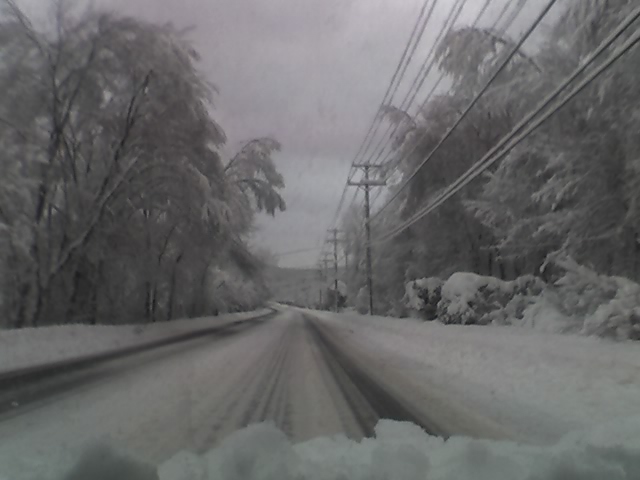 Simply beautiful. Notw how much snow was on the trees and how far they bent over. 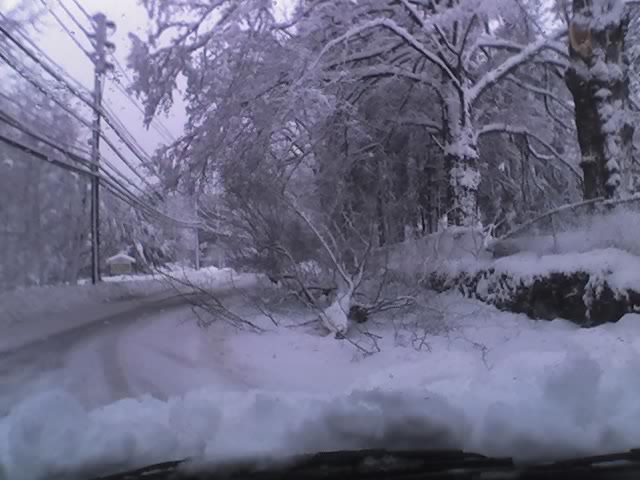 Well, and many of them were just lying on the streets. This was rather dangerous too ;-). 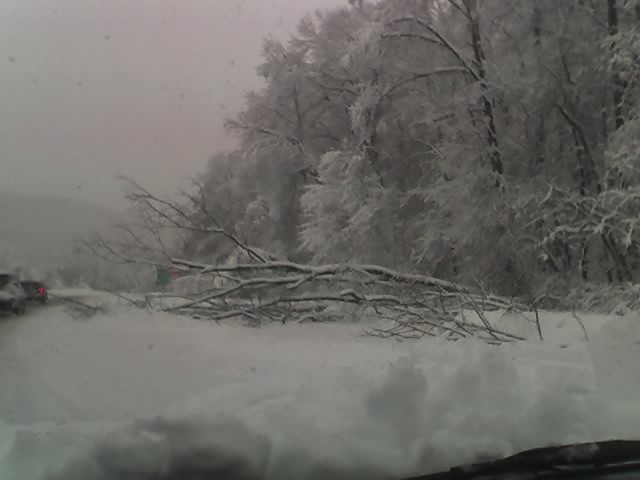 This was on freeway 232 – the tree was on two of the three lanes!! I nearly crashed into it. 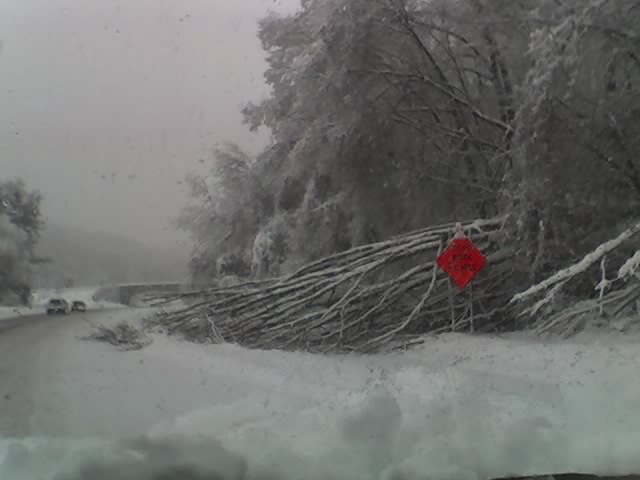 Another big one on two lanes. 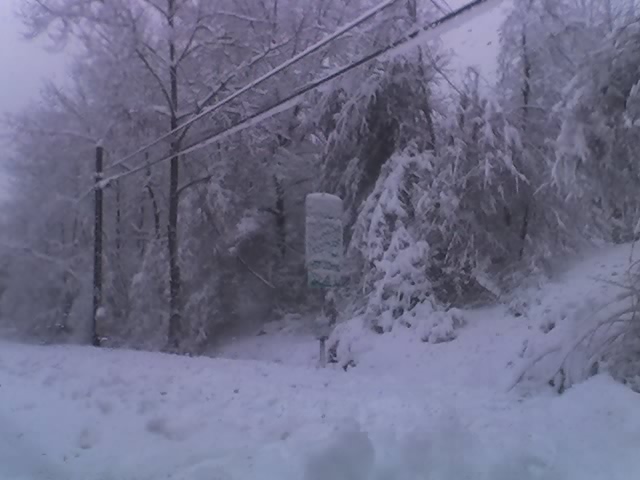 That’s how virtually all street signs looked like – really annoying if you don’t know where you are? 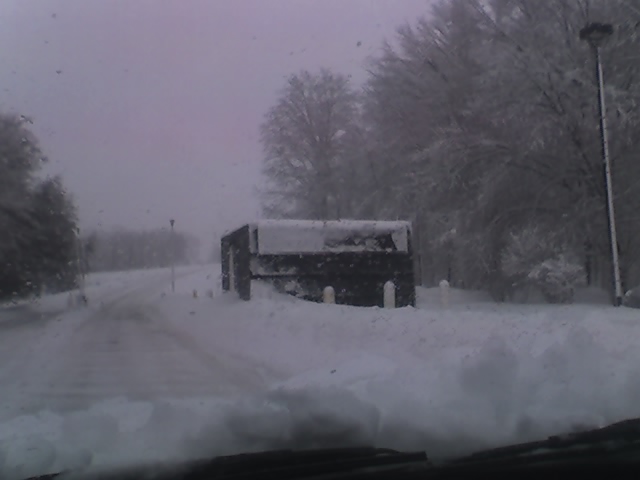 The entrance to IBM TJ Watson. 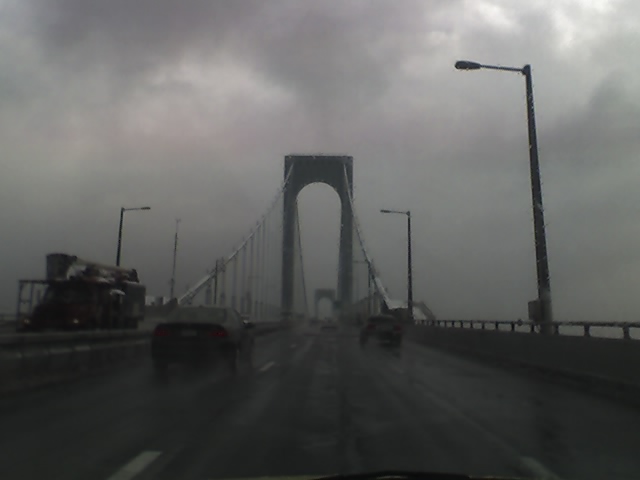 Well, this whole drive reminded me of GTA IV (thanks again to Microsoft for the xbox 360). Especially the Whitestone bridge in the Bronx … like GTA, but it was $5.50 toll instead of $5 ;-). 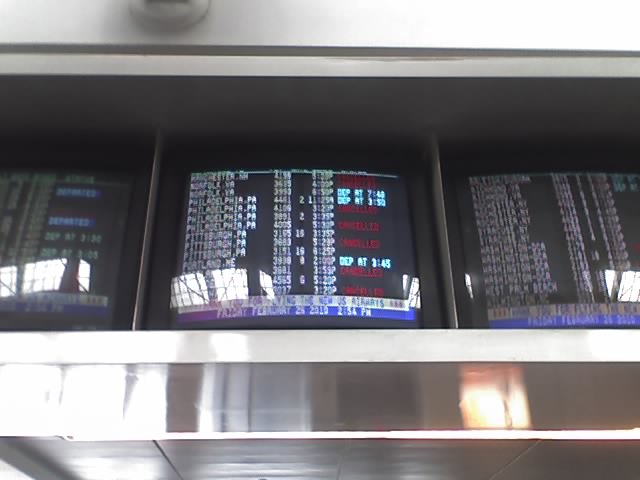 A departure monitor in the La Guardia airport — 90% of all flights canceled. 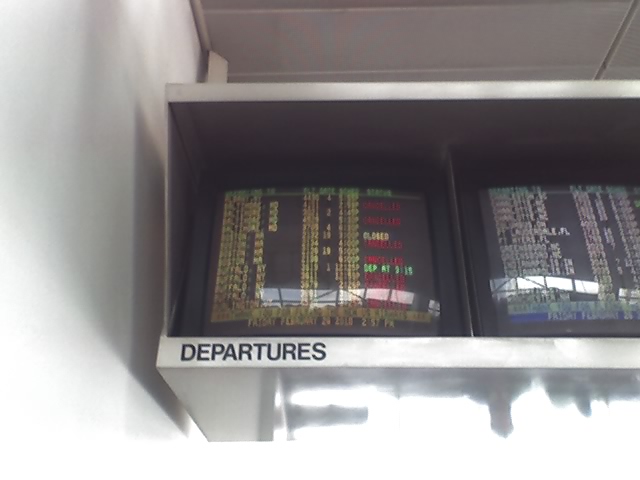 Another one. That was bad.

But I heard the announcement that a plane that was delayed from the day before was leaving in five minutes to Indianapolis. I took my chance, ran to the gate agent and asked to be put on standby for this one. He told me the flight was full and I would have to hope that somebody didn’t show up. Well, and there were about a dozen people on standby waiting for their name to be called (I came last). So one guy wasn’t there — and they called my name (I was the one with highest status in line ;-)) and I got on the flight. 1.5 hours before my scheduled departure (this flight was canceled though). And I made it home, still one hour before my scheduled arrival :-).

Some of my colleagues who chose to fly out of the closer but much smaller Westchester Airport were delayed by two days.

Didn’t you have that point in your life where you wanted to move to a city that sounds like a bottle full of alcohol? Yeah, that’s what we did. As mentioned before, we found a beautiful apartment near downtown Champaign and now we had to haul all our stuff there. My first plan was to take a pickup but Natalia fortunately convinced me to rent a moving truck. We chose Budget (mostly due to the unbeatable price of $170 for the one-way rental including unlimited miles and a rich set of insurance options). We got a 16 foot truck, well, if you’re like me then you have no idea what that actually means. For all Europeans: it’s a two-ton truck (gross total weight 8 tons), so very nice for moving: 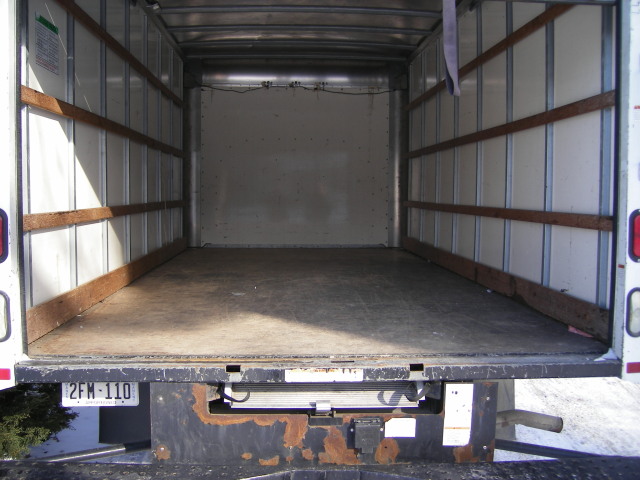 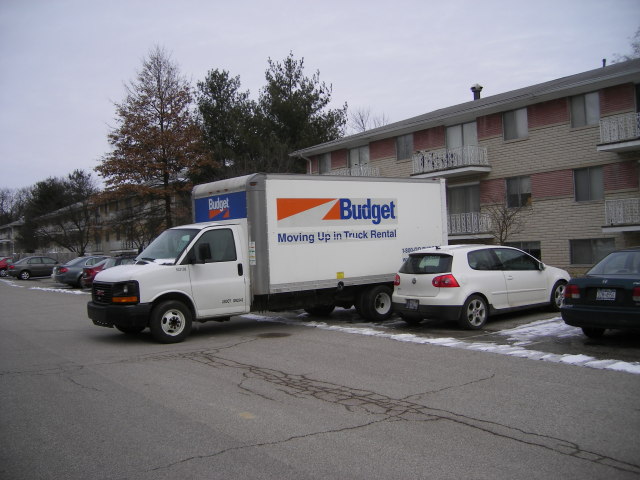 Well, the truck was actually not the first part. We started with collecting all the c**p, aehem, nice things, I collected over the years in the living room: 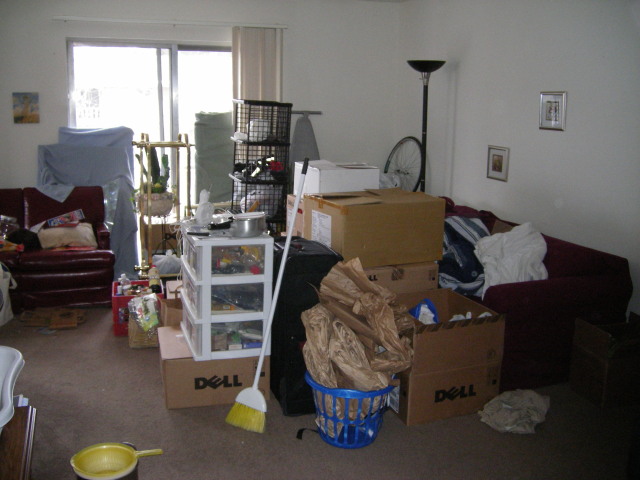 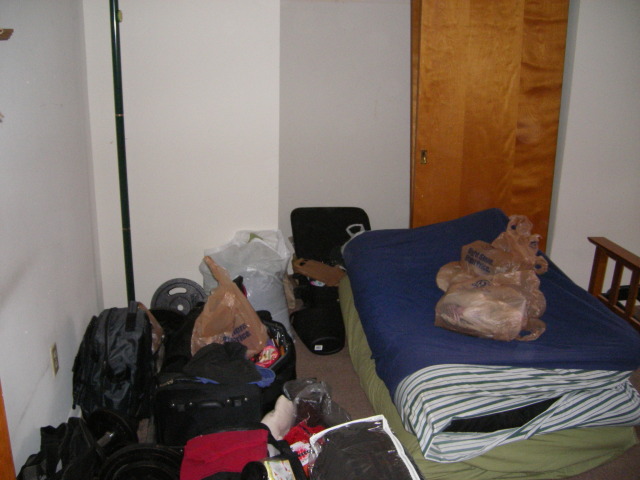 Natalia helped with, aehem, did most of the packing (especially the numerous kitchen utensils): 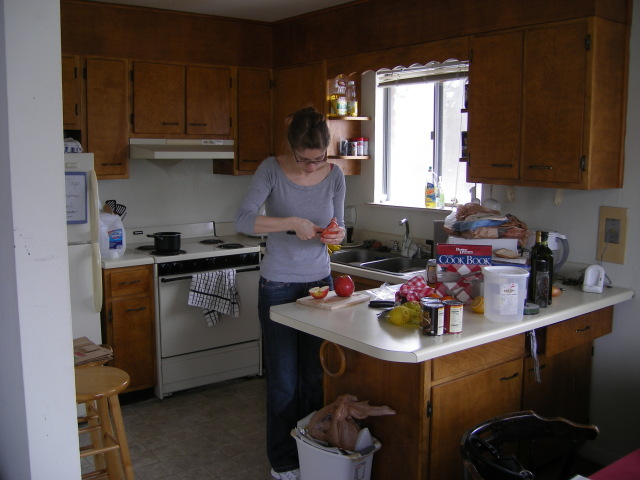 Fortunately, we had some friends helping us to move (especially for the heavy stuff like the pull-out couch!): 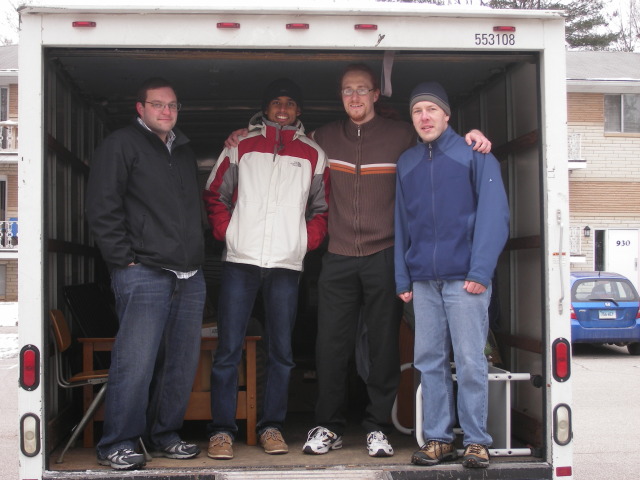 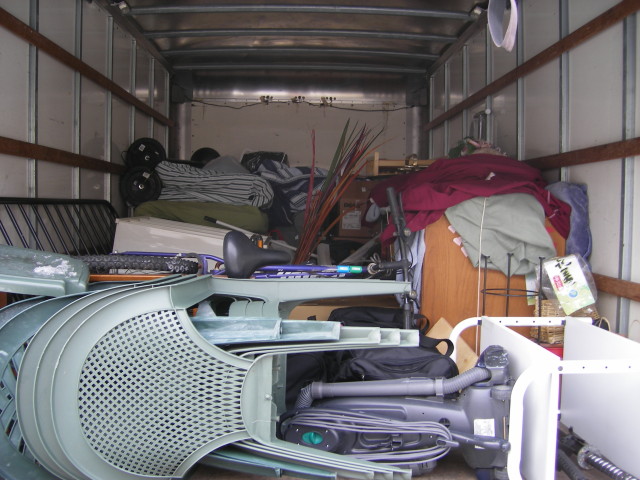 We then drove up to Champaign (I planned to go through Indy to avoid curvy and bumpy roads, but I did not include I-465 in my calculation — I-465 is a completely broken mess and nearly destroyed my mirror!!!).

Well, we arrived good and nothing was damaged :-). We only had to buy a new shower curtain and some basic things to get started (total about $50). We’re still getting settled but I conclude that the move was a big success :-). Actually, Champaign is not as bad as it sounds. It offers many more and more exciting shopping opportunities than Bloomington. It also has a somewhat real (but unnecessary complicated) bus system. It seems pretty decent in general.

Btw., did you see all the snow on the pictures? Yes, it was about -10 degrees when we moved but that didn’t turn out to be a problem. It was not really cold after carrying all the stuff around :-). We started and 9:30am and finished at 6:30pm (finished meaning that we had all the stuff out of the truck).